Monomoy Island National Wildlife Refuge is a narrow north-south couple of islands off the southeast corner of Cape Cod, Massachusetts. Established in 1944 as a habitat for migratory birds and later declared a wilderness area, this long stretch of sand and plant life is a very special place, unspoiled by humans and indeed a refuge for a numerous variety of birds. Stretching for about eight miles off the coast the Refuge consists of sand dunes, salt and fresh water marshes, fresh water ponds, and is always expanding and receding with the waves and winds from the seasonal storms that regularly hit the Cape area.

In the summer of 1979 I was invited by my good friend Joseph O’Hara, to join him and two of his brothers, Edward and Richard O’Hara, on a sightseeing boat trip around Monomoy Island. The trip was to consist of transporting his Richard’s outboard powered boat, a 14 footer, to Chatham on southern edge of the “elbow” of Cape Cod where it would be launched, then travel south along the western shore of the islands, around the southern tip, then back on the eastern side north back to the launch site in Chatham.

First, I need to introduce Joseph O’Hara. I first met Joe in 1975 when I was shopping for a good airtight wood-burning stove. At that time with the dramatic rise in heating oil prices, there was a rush of people trying to reduce their heating bills by burning wood, and the preferred wood burning stove was an airtight, which controlled the burning of the wood with a thermostat regulating the air supply to the combustion. The Riteway stove was recommended to me and upon calling and inquiring, the local distributor of this particular brand happened to be one Joseph O’Hara from the town of Carver, Massachusetts. I called and Joe and his wife Joanne came for a visit with informational brochures, advice and recommendations. Upon meeting Joe it truly seemed like I had known him for a long time. I ended up buying a Riteway Model 37 and when it arrived, Joe assisted me in getting it installed. Subsequently Joe and I became fast friends. Both of us into running at that time, I often ran with Joe through the cranberry bogs near his house and after the runs, enjoyed his wife’s grapefruit juice and vodka drinks, which were not only delicious but wonderfully inebriating, especially after a three mile run. My friendship with Joseph O’Hara has continued to the present day, with gaps imposed by changing locations and evolving personal situations.

Typical of Josepth O’Hara, by profession an engineer, the trip was well organized and planned. I was to bring the beer, Joe and his brothers the food plus of course the extra gasoline for the outboard motor needed for this better than twenty mile trip. The trip was to be especially meaningful for Richard because not only was the boat his but for many years he had exhibited a great interest in birds, sea birds in particular and even had a hobby of carving birds from wood. His detailed and perfectly proportioned likenesses included seagulls, sandpipers and ducks. So Richard was really looking forward to this trip.

Everything proceeded according to plan. The day was quite beautiful – sun, perfect temperature and very little wind – the last point very important since our boat was a bit small for the open sea. We successfully backed the trailer into the water at the launch point in Chatham, provisioned the boat and headed out to sea. Again, a blue sea, gentle waves, a glorious sky and abundant sunshine made for a perfect outing. We proceeded toward west side of Monomoy Island, enjoying our first of many beers for the day. 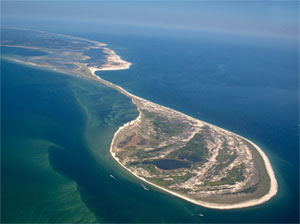 After cruising about halfway across the western shore of the islands, we stopped along the beach and pulled the boat onto the sand so that we could take a walk through the grass and the dunes and enjoy the wildlife and the natural unspoiled beauty of this remarkable place.  It was at this time that that Joe discovered that we did not have the extra gasoline with us. His brother Richard had apparently forgotten to put the container in the boat. Joe was enraged and scolded and berated his brother for forgetting it. His brother’s response was one of simple disengagement, responding to Joe’s tirade with, “Wow, what a beautiful day this is. I can’t believe this great day – a perfect day for a boat trip”.

Actually Joe’s concern was well founded. The currents and breezes were favorable for the trip south but returning in a northerly direction would be against this wind and current and would require more fuel. Joe feared actually that we would not have enough fuel to even return to the launch point in Chatham. So this lack of extra fuel meant that we would have to end our journey right there where we had pulled up the boat and we would just have to hope that we had enough fuel to get back.

So making the best of a bad situation, Joe, his brothers and I decided to enjoy the island for a little while before attempting to return and proceeded  to walk east across a narrow part of the island, taking some food and drinks with us to enjoy while exploring.

After walking through the dunes and native plants on this beautifully preserved island, we sat for awhile on a driftwood log among the dunes to enjoy the sun, the sky and the breezes and have a go at our food and drinks. It was at about this time that Joe noticed an anomaly on the smooth white surface of the dunes that surrounded us. About twenty feet away the whiteness of a sand dune east of us was spoiled by an incongruous dark angular object. Walking over to this spot he saw the rusted red paint on what looked like the handle of a container. Digging away some of the sand he exposed a rusted rectangular metal gas can. With some effort, Joe removed the main lid, sniffed the contents of the can and was astonished to smell the familiar odor of two cycle engine fuel – gasoline mixed with oil. Finally digging the container free, we saw that the entire five gallon container was full. We all looked at each other in disbelief – how could this be? Right when we needed it, this can of fuel, probably washed off of someone’s boat in a storm and washed up onto the island, appeared as if by magic. We could not help but wonder about all the what-ifs – what if we had gone inland a little more to the south, or a little more to the north? What if we had not gone this far inland – all manner of what-ifs and what-if-we-had-nots. If any of these had occurred, we would not have found this old can, still full of fuel, truly a miracle!

So Joe, his brothers and I finished our lunch and our walk, carrying the can of two-cycle fuel back to the boat, and poured it into the fuel tank, filtering it through a piece of cloth, in case of any bits of rust. Actually the gas was incredibly clean. So we confidently and joyfully cranked up the outboard, resumed our trip, and cruised leisurely all the way around the southern tip of the island, basking in the realization of what had just happened and feeling quite special.

To this day, Joe and I recall this special day and this miraculous event with wonder and pleasure, still thinking why, how and what if, all the while knowing that somehow the special powers or fates that sometimes appear to determine events in life, decided that we should find this old can of fuel to continue our outing and return safely to our cars and our homes.