I love to drive. When I appear at a destination, east or west, and am asked, “Did you fly?” I have often answered proudly, “No, I drove”. Why do I still prefer driving cross country when, at a time of cut rate airlines and expensive gasoline, it may be cheaper to fly? Well I simply love the feeling of sitting behind the wheel with my foot on the gas pedal, in full control of my vehicle and my fate, with some good music or recorded books to listen to, some dried fruit and nuts to munch on, heading down the highway toward some distant destination.

I have often defended this preference with the rationale – I can leave when I want, stop when I want, take as much time as I wish, pause to see the sights or to visit friends, and so on – all of which are impossible to do when traveling by air. But…I have to admit that I rarely do any of these things and seem to be consumed instead with a desire to “make time” –  travel as many miles in a day as I can, and try to get to my destination as quickly as possible.

All this began with family trips when I was a child in New Jersey. Most summers, Mom and Dad, or sometimes just Mom, would load the car with a few suitcases and some food, then load it with us kids and off we would go, toward North Dakota to see Mom’s parents, the Baxstroms, or to Missouri to see the Friedly grandparents, or both. These trips usually included a stop at the church headquarters in Westminster, Colorado, north of Denver, where we had many church friends and where Mom and Dad met as high school students. As Dad got more committed to farming during the summer it became mostly Mom who took us, leaving Dad to stay at home and cultivate his crops. 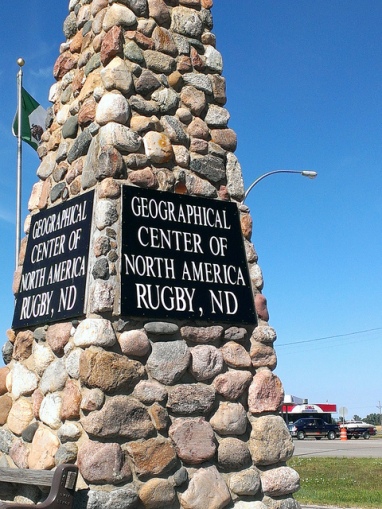 When traveling with the family as a child, we never stopped at motels. We would instead stop and stay overnight at relatives’ homes, if convenient, or at church “missionary homes”, both of which were scattered at convenient intervals across the country. Thus planning a day’s drive did not include stopping to see any of the sights, but just to get to the next place to stay overnight. There were some exceptions to this rule – on one trip I can recall visiting some Native American areas in Minnesota and the Dells of Wisconsin, seeing Bagnell Dam and boating on the Lake of the Ozarks in Missouri, seeing Mount Rushmore and buffalo herds in the Black Hills of South Dakota, the “Geographic Center of North America” in Rugby, North Dakota and visiting the “International Peace Garden” on the North Dakota – Canada border. But usually we whizzed right by these kinds of places to get to where we were headed.

Usually the main thing for either Dad or Mom, whoever was the driver in charge for that given trip, was to “make time”. Many times, I can remember Dad or Mom just stopping along the road somewhere late at night, when whoever was driving simply could go no further, and sleeping. This was done perhaps behind a church in a small town (churches were deemed to be safe areas) or simply driving off the highway out into the middle of fields on a section or quarter road. I can remember so well Mom or Dad slumped over the wheel to sleep or leaning their heads between the seat back and the window while us kids in the rear seat flopped wherever we could, draped all over one another trying to get into a position where we could get some sleep. 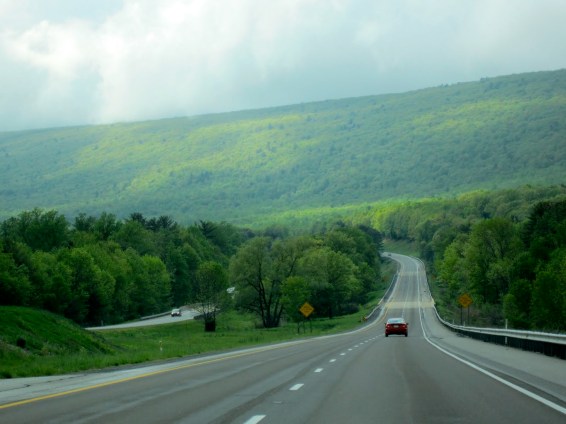 When leaving New Jersey, our first stop was always at Uncle Emil’s in Wooster, Ohio, a very convenient 500 mile trip, mostly on the Pennsylvania Turnpike. “The Turnpike”, then so called because it was the first such big toll road, was to us was one of the wonders of the world. To travel unimpeded by intersections or traffic lights, on a four lane highway with wide shoulders, through tunnels flattening out the  high ridges of the Appalachian mountains, was an incredible experience for drivers in the 1950’s, many of whom could doubtless recall how slow and difficult it was previously to travel east or west through Pennsylvania. So stage one of any trip west was this 500 mile jaunt, a good day’s drive and no sightseeing, just the regular stops at the Howard Johnson’s rest stops to go to the bathroom and buy some gas.

The next stop could be a church missionary home in Cincinnati, Ohio, St. Louis, Missouri, or in Omaha, Nebraska. Or if you left early and drove fast and didn’t stop much, it was possible to get to Versailles, Missouri and Grandma and Grandpa Friedly’s on the very next evening. From there, it was possible to drive through Kansas and eastern Colorado and get to the church headquarters in Westminster on the third day. I remember the competition among us kids as we crossed the plains of eastern Colorado, all desperately craning our necks from the back seat to see who would be the first to spot Pike’s Peak, the first sign of the Colorado Rocky Mountains from US 36, 24 or 40.

Traveling America’s highways was quite different in the 1950’s. Before the Interstate Highway network you traveled east or west, once you left the Pennsylvania Turnpike, on US 40, US 24, US 30 or US 36. These highways were mostly two lanes and of course went through countless little towns. And on these highways you actually saw much of the country, got close to the local stores and markets, could stop and get fresh vegetables at a roadside stand, or stop at a little picnic table under a tree along the highway to make and eat sandwiches. Today, as John Steinbeck mentioned in “Travels with Charley” you can go coast to coast on the Interstates and not see much of anything.

On these long trips we children got used to playing a variety of games. One such activity was counting the cars of the railroad trains we saw. Another was to try to form the whole alphabet from license plate letters we saw on cars we passed or which passed us. Or we would form the alphabet from letters on signs and billboards along the highway. X’s and Z’s were very hard to come by, which added to the challenge and competition of the game. 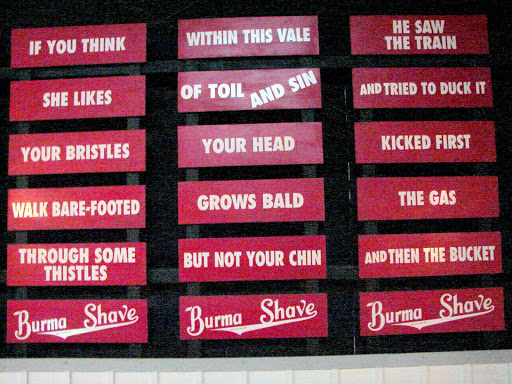 Another pleasure of the open road back in the 1950’s was reading Burma-Shave signs, which were a series of six or so red signs positioned about 200 feet apart along the shoulder with white lettering containing a clever jingle and ending with “Burma-Shave”. We eagerly looked for the next set of signs and recited the jingles in unison as each sign neared and became readable. A variety of nostalgia websites contain many of these jingles. Some examples: DRINKING DRIVERS…NOTHING WORSE…THEY PUT THE QUART…BEFORE THE HEARSE…Burma-Shave”, “DINAH DOESN’T… TREAT HIM RIGHT…BUT IF HE’D SHAVE…DINAH MITE!…Burma-Shave”, “DON’T LOSE… YOUR HEAD…TO GAIN A MINUTE…YOU NEED YOUR HEAD…YOUR BRAINS ARE IN IT…Berma-Shave”, and “BEFORE I TRIED IT…THE KISSES …I MISSED…BUT AFTERWARD-BOY…THE MISSES I KISSED…Burma-Shave”.

Another common sight while traveling by car in the 1950’s was the canvas water container hanging from car mirrors or radiators. These containers allowed the water inside to dampen the canvas, which then kept the water cold from evaporating surface moisture. You would see these bags mainly in the west of course since the more humid eastern air was not an effective evaporator/cooler.

Since the major east-west highways at that time often paralleled railroads, I also remember another dramatic sight – long rows of telegraph poles, laden with multiple cross pieces which in turn bore dozens of glittering glass insulators carrying scores of wires. These poles and wires undulated in a picturesque and dramatic wave pattern for as far as you could see.

On these trips our diet was very basic. We opened cans of Van Camps pork and beans and ate spoonfuls directly out of the cans or maybe if we stopped, used paper plates and spoons we brought with us. We also bought loaves of bread, bologna and mustard and ate bologna sandwiches as we traveled. I can remember one time when Mom stopped in a little Midwestern town at a Red Owl supermarket where creamed corn was on sale at ten cans for a dollar. We ate nothing but creamed corn directly out of cans for the next couple of days.

We usually went to the bathroom when we stopped for gas. But if there was an emergency, we simply pulled over onto the shoulder and opened the two right side car doors on the ’49 Chevy or the ’54 Chevy wagon, and the child who needed to go went on the shoulder, the doors providing some privacy.

So “making time” on the big open American highway has been a huge part of my life. But it seemed that when traveling by car I was always pressured by time or circumstance to get someplace as quickly as possible. Even now, having the joy and privilege of homes in Vermont and Arizona and looking forward to some leisurely trips between them, it still seems that there is always something that makes speed essential – a couple of times the advancing winter weather when we returned to Arizona later than we wished, or family social events and home maintenance needs in other cases. Hopefully a leisurely trip during which I could drive through the south or through Canada, or through the Midwest to again see where my parents grew up, is right around the corner.

But up to now it’s mostly been driving as fast and as far in a day as I can because some deadline or other is staring me in the face. I did break my own record a couple of years ago when we had to get back to Arizona from Vermont (again, by a certain time) and drove from Paragould, Arkansas, where we had visited the last of Dad’s siblings, Aunt Burton, to Albuquerque, New Mexico, approximately 1100 miles in a day. A great drive to be sure, and I hope the last of them. I must slow down. I have passed so many roses in my life without getting even a whiff and at this point I should not care anymore about “making time”.