In the summer of 1975 I drove west to visit my parents and brothers in Denver as I usually have during the summer. At that time I owned a Honda CB360 while living and working in Massachusetts. So I was gratified to discover that there were some motorcycles there with three of my brothers – all Honda CB500’s.

One day my youngest brother Stan and I decided to take a trip by motorcycle to the top of Mount Evans, one of Colorado’s 55 famed “fourteeners”, a 14,265 foot (4348 meters) peak in the front range and fairly close to Denver and one of two high peaks, the other one being Pike’s Peak near Colorado Springs, that have roads all the way to the top. The Mount Evans road has the additional distinction of being the highest paved road in North America. On the appointed day I borrowed my brother Richard’s motorcycle and Stan and I took off mid morning on our adventure. We wore fairly light clothing since it was a beautiful summer day, but we carried warm jackets and gloves for the later part of the trip since we would encounter much cooler high altitude weather as we got into the high mountains.

As we proceeded west from Denver on Interstate 70, the scenery changed to beautiful mountain valleys and forests as we ascended to around seven or eight thousand feet. We had stopped for a breather somewhere along the highway where I opened my 35mm camera, set it on automatic and hung it around my neck. After resuming our trip I took a couple of photos of my brother as we cycled along at 60 miles per hour or so.

I tried one photo of Stan as I moved ahead of him on his left. It came out bit blurry but still captured the moment and movement. 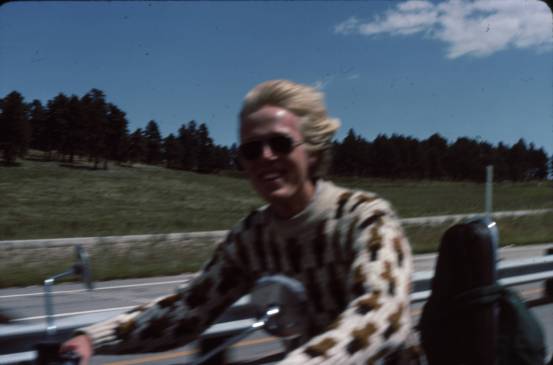 Then a few seconds later, as I was behind him on his left, I called to him to turn around and took this shot. 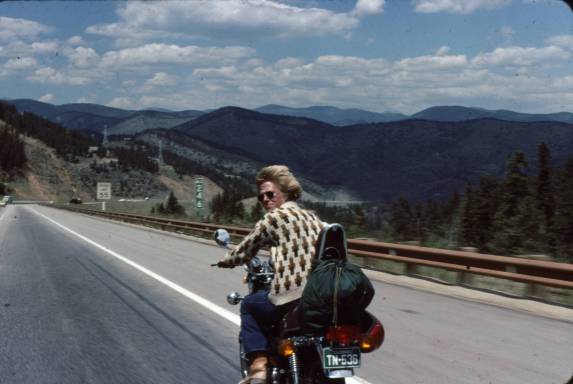 We left Interstate 70 at Idaho Springs at 8700 feet, paused to put on our jackets and gloves, and proceeded south on Colorado 103 steadily ascending in altitude for the 13 miles to Echo Lake at 10,600 feet. We then turned onto 15 mile long Colorado 5, the Mount Evans Scenic Byway, and continued on this undulating road, replete with multiple hairpin turns, for three miles to above timberline. We then continued to wind and circle upward past Summit Lake, another beautiful landmark, at 13,000 feet.

After a few more miles of steep winding road, we at last reached the summit parking lot where there were a few cars parked at the souvenir shop that is maintained for the summer months. We hiked the additional quarter mile to the summit to enjoy the view, took a few pictures, relaxed at the store for a few minutes and then headed back down the mountain to Idaho Springs, Interstate 70 and home

The excitement of motorcycling to such a high altitude with my youngest brother Stan made this a most memorable event which I have enjoyed recalling and reminiscing about for many years.