I have lots of “pet peeves” which I deal with by rolling my eyes, sighing emphatically, shaking my head, making a disparaging remark or maybe uttering a profanity or two. These include inconsiderate drivers, telephone salespeople, rap “music” and the person in front of me in the “about 15 items” supermarket line with clearly many more than 15 (and yes, I counted them). Thankfully, I avoid conflict by doing much of this reacting mentally, not physically, although my overall body language may give me away. But lately, I have extended the list of things that irritate me with the stupidity and thoughtlessness exhibited by many of the people I encounter in the gym at which I work out most days of the week.

I love this gym – it’s huge, it’s modern, with dozens of cardio machines of all kinds – bicycles, treadmills, ellipticals, stairclimbers, rowing machines, yes they’re all there. It also has more weights, benches, dumbbells and barbells than I have seen anywhere. Also, the selection of resistance machines is incredible. At 75 I’m not trying to put on muscle, I’m just trying to keep what little I have left, so I have a modest routine that I follow each time I go, rotating a series of resistance machines with dumbbells and other machines over a two-three day cycle and correspondingly alternating my choice of cardio machines. My daily session takes approximately an hour – around 30 minutes on the resistance machines or weights, and 30 minutes on whatever cardio machine I’m on that day. It’s a great workout and I experience a healthy exhaustion when I come home to shower and eat my breakfast.

But every day I go, I am frustrated, bothered and irritated at what I see. It seems that there’s always some goofball lifting his weights or pulling or pushing the handles on his resistance machine who thinks he has to wince, grimace or grunt loudly with each of his movements. Sometimes I think – wow, this guy must be lifting (or pushing or pulling) quite a bit, to make such a loud and obvious show of effort. But when I glance at the weights or move to the machine and use it myself without adjusting, I discover that his exercise required but little effort – certainly not the loud and effusive demonstration of superhuman exertion that I just observed and heard. I mean, what are these people trying to do? Show off their strength? No, they’re not requiring or using that much strength. Trying to get noticed? Why? It’s a just a big gym – everybody is exerting themselves. To impress the cute girl using a machine across from him? No, too bad, she’s rolling her eyes. No, it’s just the “I’m important, I’m different, I’m exerting myself more than anyone else here” syndrome. Well thank God for the majority of exercisers who perform their activity quietly and unobtrusively, without the contorted countenance or the loud grunts. 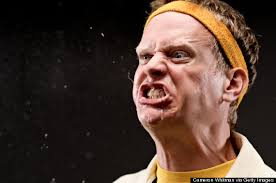 And related to this are the ubiquitous musclemen who not only gaze admiringly (and longingly?) at themselves in the huge mirrored wall behind the weight racks, but attract attention to themselves by noisily banging weights down on the gym floor when concluding their lift. This is especially the practice of those genuine weight-lifting types who perform a “clean and jerk” (with emphasis on the “jerk”) exercise with barbells and slam the loaded bar down with a startling, deafening clank. Hey, really not necessary, but if it garners attention, why not?

Another pet peeve in my lovely gym is related to today’s world of cell phones and social media. I’m busy doing my machines, starting to breathe a little faster, by going from one to the other in rapid succession. But then I find a doofus sitting on a machine – just sitting, mind you, not using the machine – not pushing, pulling or lifting but just sitting there, taking up my next machine staring at his cellphone screen, perhaps thumbing a message to someone, perhaps just checking Facebook to see what a “friend” had for breakfast that morning, or if he got up feeling good, or had a great night last night. But there he sits – for five minutes, ten minutes, fifteen minutes (yes, I’m counting), occupying the machine that I want to use. My God, you inconsiderate fool, there is a refreshment area in the gym, with tables and chairs, there are stretching pads all over the place – go there if you want to play with your cellphone, don’t sit at a machine when someone else may want to use it! 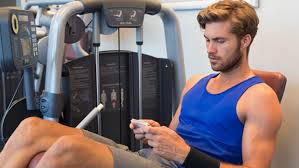 This selfishness and lack of consideration is demonstrated in other ways as well, usually with a couple of old guys chitchatting – one sitting idly on a machine (yes, the next one I was going to use) and the other leaning up against it talking. They both laugh, gesture with their hands, guffaw and chuckle, shake their heads in agreement or disagreement, and talk and talk and talk. For five minutes, ten minutes, fifteen minutes (yes, I’m timing them). One day, and I’m not kidding, two old fools, one on a machine and one leaning against it, were talking when I arrived at the gym, and were still talking when I left an hour later. Again, if these selfish and inconsiderate jerks want to talk – go sit down some other place and talk. Don’t occupy a machine when others may wish to use it. 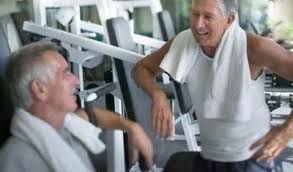 Occasionally when this has happened, I have asked the idle occupier of a machine, “Hey, pardon me, but are you going to use this machine?” Usually I’ll get a dark look in return but the person may really lay down the cell phone, grab the handles and resume his “reps”. Or if it’s two old doofuses I may get a highly animated emphatic apology as one old guy hastily scrambles from the machine. Or I might get an excuse and apology like “Gee, sorry, I didn’t know you wanted to use this machine”. Yeah right, you were sitting there goofing off for a half hour and thought you were the only one wanting to use that machine? Come on now, wake up, what planet are you on? 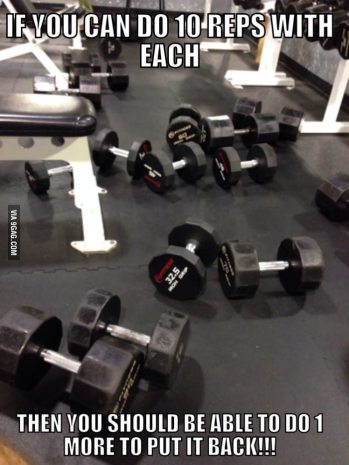 Another pet peeve is not putting things back where you found them. One of the important maxims in the “Golden Rules for Living” that applies at home or anywhere else in the world is “If you move it, put it back”. Well, most people working out at my gym follow this rule. It’s really not that difficult – all the barbell weights are arranged in order on eight or so perfectly constructed racks arranged along the weight benches. It’s really easy to put them back after using them. And all the dumbbells are arranged on racks in sections numbered for the weight – there are the 10’s, the 15’s, the 20’s, the 25’s and so on. You just have to be smart enough to match the number on those you are using to the number on the rack – that’s where they belong. But always, always, someone who can’t read the numbers or who just doesn’t care enough to put things back where they found them, screws things up – there’s a couple of 30’s where the 25’s belong or 10’s where it says 15. I just can’t believe that people do this. Is this an ego thing? Hey, I’ll do what I want, to hell with rules or is it not caring, or is it just plain stupidity – gee, that 25 looked just like a 30. Whatever motivates people to do this, or disinclines them to do things properly – irks the heck out of me. So, taking the two 25’s I want to use off the spaces where 35’s go, I shake my head in disbelief and roll my eyes, hoping some offenders might see how frustrated I am. But of course they don’t and they don’t care anyway. The world has people like this and there’s nothing I can do about it.

And probably the most frustrating pet peeve of all in my gym is watching the inevitable idiot who hops on board a treadmill, cranks up the speed to an adequate level, then increases the incline so he’s walking uphill, but then spends his whole time on the machine holding on to the bar or the control panel. This is stupid – you’re not really walking uphill, you’re being pulled uphill. You’re not getting a good workout at all. You’re hanging on to the machine for dear life, being pulled along. Oh yes, maybe you’ve seen other people do it and so you do it yourself, without a question or a thought about what it’s doing or not doing for you. You do your cardio this way for six months and still have the beer belly you had when you started. Moreover your cardiovascular condition has not improved one bit.

Yet you think that because your treadmill is elevated 10 degrees and pointed toward the ceiling, you are getting a great workout. But you’re wrong, you idiot, you are holding onto the bar. Hey you fool, try leaving your machine at that same incline and letting go. Big difference, isn’t there? Now you’re really walking uphill, you’re swinging your arms, your heart is pounding, you‘re breathing hard, you’re actually breaking out into a sweat. This is a real workout. But there they are, always the same people – machine set at 10 or more percent incline, speed at 3.5 miles per hour, and they’re holding on to the bars, thinking they are getting a workout when they’re not. I can’t believe it. But it happens….every…..day.

But wait, there’s one more. Just this morning, when I was doing my cardio on a recumbent bicycle right under the CNN screen, some guy, already drenched and dripping (from his chin) with perspiration resulting from his encounter with another cardio machine, plopped himself down next to me to check the news and sip his water 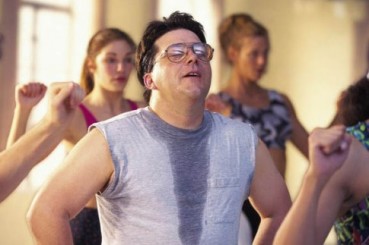 . Then after polluting the air around me with a rare redolence of BO, got up and left, leaving the seat and back glistening with his sweat. This is disgusting. First, while it’s ok to sweat, actually good in the eyes of some – to help leach “poisons” from the body and whatnot – it’s not ok to offend others with the sight and odor. Nor is it ok to leave a residue on the machine. A rule to wipe down equipment after use should be established and enforced. And users of my gym ought to have the basic decency to bless their underarms with a stroke or spritz of deodorant before coming to the gym. Or at the very least, how about bringing a towel?

Really, I’m tempted to run off and distribute little printed notes that say “Hey, want to use your cellphone? Then find another place to sit”. Or “Hey, what to chat with friends? Find another place to chat” or “For God’s sake, man, stop cheating yourself…let go of the handles and really walk uphill” or “Hey, could you please wipe your sweat off the machine when you’re done?”. Or better yet, I wish my gym management would post some signs in convenient places saying “Use your machine and move on” or “Work out, don’t chat or text” and “Please wipe down equipment when finished”. Perhaps this huge gym should establish “texting zones” or “chatting areas”. There’s lots of room. And there have to be many other people just as frustrated as I am.

But I am sure they won’t and I’ll just go on this way – elevating my own heart rate and breathing rate not only through my workouts but through the constant frustration with the inconsiderate and egotistical people with whom I share this marvelous facility. C’est la vie.