Most of us are familiar with facts about which countries still employ this medieval practice. But we should remind ourselves that over two thirds of the world’s countries have outlawed the death penalty, including all of the “advanced” countries, except ours. And we are the only country in the Americas that still employs capital punishment. In the countries still imposing the death penalty, the majority of executions worldwide in 2013 were conducted in China, Iran, Iraq, Saudi Arabia and…. the United States of America. Why have our national leaders placed us in this kind of company? And why do so many states in the U.S. still choose to conduct what amounts to state sponsored cold-blooded murder?

The old “eye for an eye” adage from the Old Testament is often quoted by supporters of the death penalty. But read the reference to “an eye for an eye” by Jesus in the New Testament: the passage is about forgiveness and about “turning the other cheek”. And St. Paul has much to say about forgiveness in Romans 12. And of course, the good book says, “Thou shall not kill”. So forget Biblical support for the death penalty.

Another more popular justification for the death penalty is that it is serves as a deterrent to potential murderers. But does the prospect of being executed really ever enter the mind of a drug-crazed criminal shooting a clerk in a 7-11? Is the death penalty ever considered by the drunken jealous husband encountering his wife in bed with another man? I don’t think so. Is the death penalty ever a deterrent in the amoral mind of any criminal about to commit a heinous act when such a mind is incapable of imagining any negative consequence for a crime – even apprehension, much less trial, prison or execution. And statistics validate this point: the states without capital punishment have homicide rates at or below those states that have retained capital punishment.

With the revulsion we all feel for the act of murder, how can we accept and condone the machinery of the state grinding away to commit the same act. The careful preparation of the gurney or the electric chair for an execution, the ushering-in of spectators to view the horrid spectacle, bringing in the shackled prisoner and strapping him to a machine of death, and then the final gasps and spasms of death itself, are exercises in revulsion, horror and the macabre. High profile executions often attract a crowd of pro-death penalty savages, the same kind of  human detritus, flotsam and jetsam that attended and applauded public lynchings in our not-too-distant past. 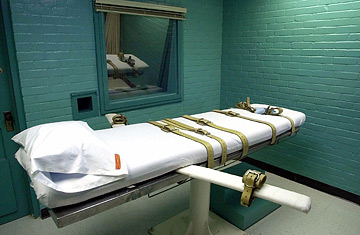 Mistakes alone are a reason to halt capital punishment. According to Amnesty International, since 1973 in the United States, over 140 people have been freed from death rows due to evidence of mistaken conviction. And since the same date over 1200 have been executed. How many of these were really innocent? Execution is final. If innocence is established later, and it has, death cannot be reversed.

Capital punishment has an ugly racist tinge also. Although capital crimes are pretty much distributed evenly among US nationalities, the death penalty is imposed on people of color with strikingly more frequency than on whites. Also, although whites and African Americans have been murdered with equal frequency, killers of white victims are 80 percent more likely to receive the death penalty. 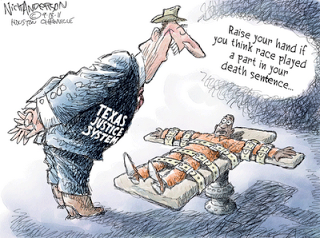 Of the states still retaining capital punishment, Texas is the killing champion. The total number of persons executed in the United States since 1976 is 1382. Of that shameful number, the great state of Texas has executed over one third – 515 people. Do you think that they were all guilty? Did all of these doomed individuals receive adequate legal representation? Were they mostly people of color? Were any of them mentally deficient? While he was governor, George W. Bush presided over 120 executions. And who can forget the bloodthirsty applause from the audience during a 2011 Republican presidential debate when it was noted by the moderator that during his decade as governor, candidate Rick Perry had allowed 234 Texas executions?

There are many dramatic stories involving the death penalty but the sentencing and execution of Karla Faye Tucker, one of Texas’ more notorious, drew protests from around the world. Not only was Karla Faye the first woman to be executed in Texas since the Civil War, but waiting on Death Row for 14 years, she was completely rehabilitated and even married her prison minister. The last of her dozens of requests for mercy and clemency was turned down with a mocking smirk by Governor George W. Bush. On the night of the execution it was reported that a rendition of “Amazing Grace” by a gospel singer was shouted down by cries of “Kill the bitch!” from the pro-death penalty crowd gathered at the prison.

Shortly after her execution, Fred Allen, the prison official who had supervised more than 120 Texas executions, resigned his position with this statement: “I was pro capital punishment. After Karla Faye and after all this, until this day, eleven years later, no sir. Nobody has the right to take another life. I don’t care if it’s the law. And it’s so easy to change the law.”

Karla Faye Tucker’s redemption and ultimate execution have been the subjects of books, movies and music. To me one of the most affecting songs is Mary Gauthier’s “Karla Faye”.

A little girl lost, her world full of pain
He said it feels good, she gave him her vein
The dope made her numb and numb felt like free
Until she came down, down, down to a new misery

A junkie, a whore, living for the next high
She’d lie cheat and steal, she forgot how to cry
Wide awake for two weeks, shooting heroin then speed
When she killed in cold, cold blood all she felt was her need

It’s an eye for an eye, now you’re gonna die
A tooth for a tooth, it’s your moment of truth
There’s no mercy here, your stay is denied
Go on and pray, pray, pray, there’s mercy in the sky

Alone in her cell, no dope in her veins
The killer’d become little girl lost again
She fell to her knees, she prayed she would die
On the cold cement floor, she finally cried

And love came like the wind, love whispered her name
It reached through and held her, lifted her pain
Fifteen years on death row, her faith deeper each day
Her last words were, “I love you all”
Good-bye, Karla Faye

Now it’s an eye for an eye and you’re gonna die
A tooth for a tooth, it’s your moment of truth
There’s no mercy here, your stay is denied
Go on and pray, pray, pray

There have been many great movies over the years that have dealt with capital punishment, several describing the agony of the impending execution of an innocent person, among them, the classic Susan Hayward movie, “I Want to Live”. Documentaries like Werner Herzog’s “Into the Abyss” are also thoughtful examinations of the practice. However, the best movie about capital punishment has to be “Dead Man Walking”, in which the heinous nature of the crime committed by the character played by Sean Penn fades into the background in the account of his agonizing stay on death row and the gruesome scene of his execution. 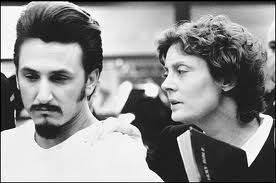 People have been questioning the death penalty for a long time. Victor Hugo in 1829 wrote “The Last Day of a Condemned Man”, a sensitive and heart-rending first person account of a man condemned to death. The novel never reveals what crime the man committed, or anything about his arrest and trial. It only paints a very depressing picture of what is going through the condemned man’s mind – never again to experience love, to hear leaves rustle on a tree or feel a breeze, or see flowers, birds, the blue sky and sunshine. He will never see his mother, his wife, or his little daughter, Marie, again. He doesn’t know when but knows he will be beheaded by the guillotine in the notorious Place de Greve.  One of the most impressive features of the novel is Hugo’s introduction, in which he paints a horrible and grim picture of capital punishment in France (finally outlawed there in 1981) and throughout the world.

I would think that in the year 2014 the United States of America would have joined the rest of the civilized world and moved beyond capital punishment (and mass incarceration, the subject of another upcoming article). While it unfortunately has not, there is, it seems, inexorable progress toward that goal. Presently 18 states have abolished capital punishment and many of the states that still have the death penalty on the books have chosen not use it. And the states where it is no longer allowed have seized the moral high ground and led the fight to abolish it nationwide. But we have a long way to go. All who oppose the death penalty need to support the organizations that are carrying this fight, among them Amnesty International,  National Coalition to Abolish the Death Penalty, Death Penalty Information Center, Students Against the Death Penalty,  and dozens of church organizations. The United States has no business supporting and practicing state-sanctioned murder.