Our new president recently made a statement that, unlike most of his utterances and tweets, actually made some sense. Of course the statement was made in isolation and not in association with any broad policy statement so it was likely a mistake, but he actually announced that it would be good to raise the gasoline tax to help pay for infrastructure needs. He evidently did not realize that his Republican Congress will absolutely not allow the fuel tax to be raised, regardless of the good sense it makes. But do we need it? Can we afford it? Absolutely.

As a regular “road tripper” between Arizona and Vermont I have seen and experienced firsthand the deterioration of our highways and bridges. I have hit an unexpected hole at 70 miles per hour on I-70 near Indianapolis and afterward wondered about the condition of my right front tire and front end alignment and have rattled over the cracked and potholed surface of I-40 through Oklahoma City and afterward wondered about the state of my shock absorbers. I have dodged dozens of dreadful potholes on I-86 between I-90 and Jamestown, NY and then, foolishly taking my eyes off the road for a couple of seconds, felt my whole car shudder as my left front tire hit one. I have glanced in horror at the chunks of concrete falling off the side and center barriers of the I-270 bridge over the Mississippi River north of St. Louis and wondered if I was about to suffer the same fate as the motorists on Minneapolis I-35W in 2007. 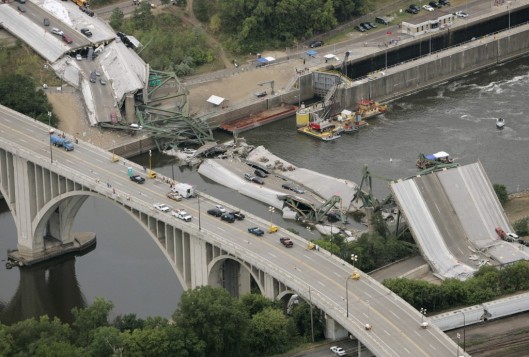 The deplorable condition of our highway infrastructure is well known but a reminder might be useful. Today, more than 60,000 bridges in the United States are considered structurally deficient and 32 percent of U.S. major roads are in poor or mediocre condition. It is estimated that it would take at least $780 billion to bring our highways and bridges up to adequate standards (incidentally that’s about what we have spent in Afghanistan over the last 16 years). The latest assessment of the American Society of Civil Engineers, which released its 2017 “infrastructure report card” last March, showed the grades for US roads and bridges to still be “D” and “C+”, unchanged since their last report four years ago. Well, what seems to be the problem? Why don’t we have the will and have mustered the means to address this huge problem? Let’s take a look. 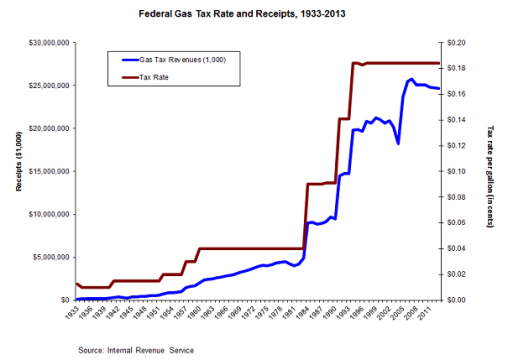 Construction and maintenance of our highways is financed mainly from the Highway Trust Fund which is maintained with a gasoline tax of 18.4 cents per gallon and a diesel fuel tax of 24.4 cents per gallon which together provide about $34 billion per year, both unchanged since they were last raised in 1993. And over the last couple of decades these taxes have become seriously inadequate because of the increasing fuel economy of automobiles and the increasing costs of highway construction and maintenance. A dollar in 1993 is worth only 60 cents today. If the gas tax had kept up with inflation, it would be 30 cents a gallon today and pull in nearly twice the amount of revenue, or $68 billion rather than $34 billion. In other words, Congress is leaving billions and billions on the table by opting for the politically expedient move of leaving the gas tax untouched. with Federal highway spending at about $50 billion per year, the yearly shortfall has had to come from other sources. But even then, that figure obviously falls far short of what we really need.

In addition Congress has failed to come up with a long term highway bill for years and has chosen instead to plug the hole with a variety of other sources: Stupid, gimmicky other sources, stopgap measures since 2005, the most ridiculous in 2014 when the Highway Trust Fund shortfall of $10.8 billion was filled by something called “pension smoothing” – additional business tax yields provided when businesses choose to reduce their contributions to employee pension funds – talk about “smoke and mirrors”! President Obama reluctantly signed that bill saying that Congress “shouldn’t pat itself on the back for merely averting disaster, kicking the can down the road for a few months and careening from crisis to crisis when it comes to something as basic as our infrastructure”. It’s shocking that since 1992 our Congress has chosen to come up with patch jobs for the Highway Trust Fund 33 times. One time in July of 2015, the patch was a three month program. And even more incredible, on October 15, 2015 Congress passed a three week extension. Try to do some long range planning to repair our roadways with this kind of financing.

These funding games are ludicrous and totally unnecessary. As noted earlier, if the gas tax had simply been indexed to inflation it would be bringing in almost twice what it yields today. But the childish and petulant aversion to taxes exhibited by our Republican-dominated Congress (I am sure that most of them have signed the “no new taxes pledge” promulgated by tax abolition guru Grover Norquist) holds sway over common sense. It’s not that hard to justify this tax. The fuel tax does not even have to be called a tax. When it was increased twice by anti-tax President Reagan in the 1980’s, and then by Clinton in 1992, the act was easily rationalized and rendered palatable by calling the tax increases “user fees”, simply charges for the privilege of using and wearing down our highways, roads and bridges. Yet our Republican congress could not even do what their hero Reagan did – increase “user fees” for our transportation system. And unfortunately, neither Reagan nor Clinton had the wisdom to tie the the fuel tax to inflation.

And Congress didn’t have the courage either to simply increase fuel taxes. Gasoline prices now are at the lowest they have been in decades. So even doubling both taxes would have resulted in fuel prices nowhere near where they have been over the last several years, would have created no hardship at all for commuters, pleasure drivers, the trucking industry or the airline industry and would have provided a much needed shot in the arm for the Highway Trust Fund. In fact, studies of gasoline price changes over the years, when indexed to inflation, show that gasoline is as cheap today as it was in the “good old days” of the 1950’s when gas prices ranged from 20 to 30 cents per gallon. On my most recent cross country car trip, I availed myself of fill-ups for as low as $1.78 per gallon, with the average expenditures ranging around $2.00 per gallon, the same or less than 1950’s prices when inflation is factored in.

But instead, look what we got. Last year with great fanfare, Congress finally passed a new five year Transportation Bill. In the boastful words of House Speaker Paul Ryan, Congress was doing “the people’s business”, finally achieving the necessary bipartisan consensus to pass a major piece of legislation. But although somewhat better than the last several highway bills which were patches at best, the new bill falls far short of what the country needs. Yes, we do finally have a multi-year bill instead of the annual patch job, which will finally enable planners and contractors to extend work over several years. But again, smoke and mirrors financing is problematic. To make up the shortfall between the expected yield of Federal fuel taxes and the 305 billion dollar total of the new highway bill presented so proudly by Ryan, the new bill relies on a number of ridiculous short-term financing provisions that have absolutely nothing to do with the problem, among them requiring the Federal government to use private collection agencies to recoup certain outstanding taxes, allowing the government to deny new passports to individuals owing more than $50,000 in back taxes, the sale of 66 million barrels of oil from the Strategic Petroleum Reserve and cutting the Federal Reserve’s annual dividend payments to large commercial banks, redirecting that money to highway construction. Can you believe this….or understand it? Again – smoke and mirrors! And Congress again refused to increase the gasoline and diesel fuel taxes or even tie them to inflation.

So what should we have done and what should we do in the future to make sure that there is enough money to maintain and repair our highways and bridges? According to ITEP (Institute on Taxation and Economic Policy) we need to do the following. First, the fuel tax should simply be increased by 10 to 15 cents per gallon to compensate for the loss in purchasing power that has accumulated over the years. Second, the tax should be indexed to inflation to meet the expected increases in construction costs. Third, the tax should automatically rise in relation to the increasing fuel efficiency of automobiles. And finally, the fuel tax should include mechanisms to prevent sudden large changes from year to year, for example, the large increase mentioned above should be phased in gradually over several years.

But a crucial question remains. Will our Republican-dominated Congress ever have the courage to increase this necessary and easily rationalized tax? The disgraceful sleight of hand shenanigans performed to fill the huge gaps in the latest multi year Highway Bill indicate that they do not. So even though we are the richest nation on earth, we will continue to have some of the lowest fuel taxes on the planet and will consequently continue our ridiculous struggle with potholed highways and collapsing bridges. Taxes are necessary costs of living in a civilized society and “user fees” to maintain our transportation system are among most easily applied and willingly borne. We need a government that has the brains and backbone to do what is necessary for the well-being of the nation.