While growing up in the Bronx in the early 1950’s young Dion DiMucci, later of the famed “Dion and the Belmonts”, would run home from school to catch the last hour of a country music radio show called the “Hometown Frolic” on Newark station WAAT and ended up buying every Hank Williams record he could after first hearing Hank on the program. At about the same time, teenager Sylvia Vanderpool in New York, later the Sylvia of “Mickey and Sylvia” and the hit song “Love is Strange” fame and future Sugar Hill Records hip-hop mogul Sylvia Robinson, loved country music because her mother listened every day to the Hometown Frolic. Also during the early 1950’s, John Herald, later the key founding member of the “urban bluegrass” group The Greenbriar Boys, while at Manumit School in Bucks County, Pennsylvania, used to bolt his lunch in order to dash back to his dorm room to obtain his intoxicating doses of bluegrass music on the Hometown Frolic. And in the 1950’s, a kid growing up with seven brothers and sisters among the farm fields of central New Jersey discovered WAAT, Don Larkin and the Hometown Frolic and fell in love with country music.

I was a child of perhaps 10 or 11 when I joined the thousands of country music fans in New York, New Jersey, eastern Pennsylvania and Connecticut, who listened to Don Larkin on his Hometown Frolic show on station WAAT from Newark. It was on Don’s show that I first heard the driving rhythms and harmonies of Bill Monroe’s bluegrass music and the plaintive songs of Hank Williams and other country artists of that day. “Larkin Barkin’ ” began each show with Gene Autry’s “Back in the Saddle Again”  and ended with the same artist’s “Goodbye Little Darlin” . The Hometown Frolic opened up a whole new world for me – the country music of Williams, Ernest Tubb, Grandpa Jones, Hank Snow, Faron Young and so many others, and the bluegrass music of Monroe, Johnny and Jack, Flatt & Scruggs, the Louvin Brothers, Reno & Smiley and the Stanley Brothers.

As the 1950’s unfolded, my interest in recorded music expanded to rock and roll and to classical music, but country music has long been an important layer in the foundation for my love of music. And I owe this appreciation of country music to the Hometown Frolic and its fabled deejay, Don Larkin, who ran the show for 11 years, from 1950 when he took it over to 1961 when WAAT was sold, changed its call letters and cancelled the Hometown Frolic. 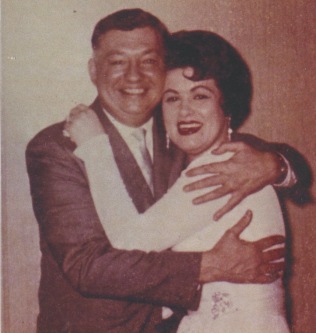 While spinning country music records for his radio audience, Don Larkin also became a concert promoter in the New York – New Jersey area, bringing live country music concerts for the first time to to audiences in this part of the country. Don brought artists such as Bill Monroe, Marty Robbins, Patsy Cline, and Johnny Cash to venues in Newark, Jersey City and Long Island. Don also successfully ventured into the songwriting business, seeing his “Stolen Waltz”, “Game of Broken Hearts”, “Don’t Keep it a Secret”, “Goodbye Maria (I’m Off to Korea)” and “She Said”, published and recorded by a variety of artists.

Earlier in his radio career, young Mr. Larkin, who played piano quite well, was prevailed upon to accompany a skinny young singer from nearby Hoboken making his radio audition. The name of the kid making his radio debut? Frank Sinatra. Don then left radio for awhile to earn his law degree but before he could use it, he joined the military to make his contribution to vanquishing the Nazis by serving as a spotter pilot in the European theater.

After his WAAT days and the termination of the Hometown Folic Don eventually left radio, ran a restaurant business in Pennsylvania for awhile and then moved to Phoenix, Arizona where he worked in real estate before retiring. And occasionally a client looking for a home in the Phoenix area must have exclaimed something like, “Don Larkin? Could you be the same Don Larkin I listened to on the radio when I was a kid? Wow, how wonderful to finally meet you!”

I basked in the memory of Don Larkin and his Hometown Frolic and continued to enjoy the music introduced to me by him so long ago, but never heard his name again, never met any others who had enjoyed his radio show or encountered anyone with any knowledge of his whereabouts until August of 1997. It was then, while home in Scottsdale, Arizona for the summer from my job at the American School of Kuwait, that on August 11, I happened to open a copy of the Arizona Republic and was astonished to see an article about none other than my childhood radio friend and hero, Don Larkin.

The Republic article was prompted by the occasion of the 20th anniversary of the death of Elvis Presley, whom Mr. Larkin had met and at the behest of his then agent, Bob Neal, had played and promoted “Baby, Let’s Play House”, one of Elvis’ early Sun recordings, on his radio show.

Since I was returning to Kuwait in a week or so I took the article with me, resolving to somehow connect with Don in order to at long last express my admiration and appreciation for him and the music he shared with me when I was a youngster. Having no home address, I sent a letter to Mr. Larkin through Thomas Ropp, the Republic reporter who had written the article, requesting that he forward the letter to Don. This he obviously did, for in October I received the following reply from Don, sent to me care of my school in Kuwait. I have chosen to reproduce the entire letter because his obvious joy and pride at connecting with an old fan perfectly reflected my own happiness with finally locating and contacting him. And the letter is illustrative of the jaunty good humor which embellished his radio program. 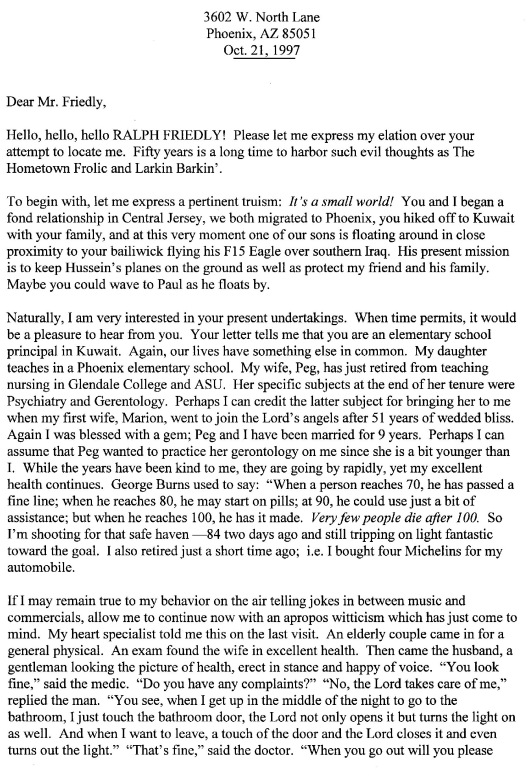 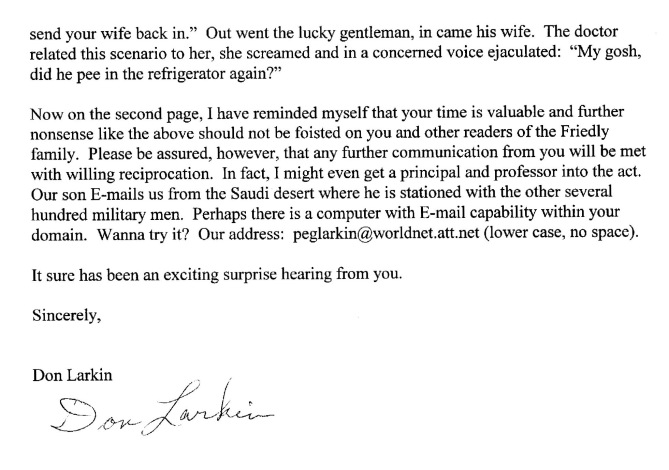 The following summer it was my pleasure to visit Don and his wife Peggy in their Phoenix home and reminisce about his time on the Hometown Frolic. Don was effusive and ebullient in describing the old days at WAAT and his years as a promoter of country music shows in the New York area. And I felt the same way with the pleasure of finally meeting Don and being able to talk with him personally. And it was a privilege to have my picture taken with my childhood hero and country music mentor.

Over the next several years I called occasionally to say hello to Don and Peg and was saddened to understand that Don was gradually succumbing to Alzheimers and becoming an increasing burden for Peg. I was not aware until later that Don had passed away in the fall of 2003 at the age of 90 shortly after I moved to a new job in Izmir, Turkey. 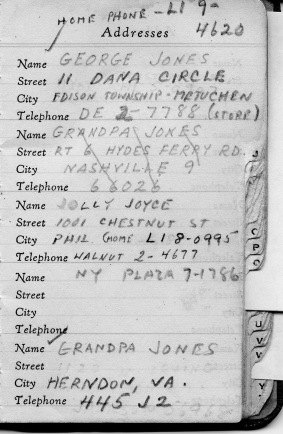 During  a subsequent contact Peg said she had put together a packet of mementos for me so I stopped by one day to pick up a tan envelope containing some real treasures. I felt very privileged to receive this gift, for in addition to pictures of Don at the height of his success and popularity as a deejay and the original (I think) letter from Bob Neal asking Mr. Larkin to play Elvis’ recording, Peg had given me the address book that Don had kept as a deejay and promoter. I was thrilled to leaf through this precious little “who’s who” of 1950’s country music and find so many familiar names (along with addresses and phone numbers), among them Hank Snow, Eddy Arnold, Chet Atkins, Elton Br 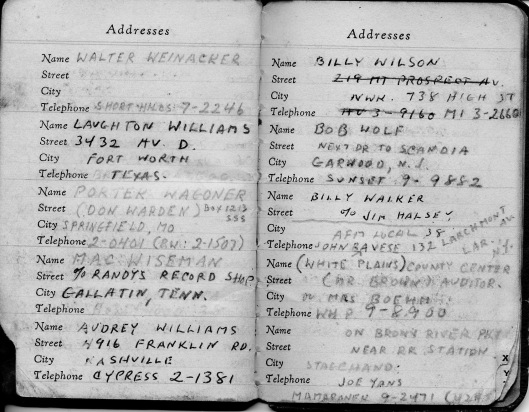 Also in the envelop of mementos so graciously gathered and presented by Don’s wife, was a copy of the September 1998 issue of Bluegrass Unlimited, which contained an entertaining, detailed and complimentary article about Mr. Larkin and his life and career, written by Bill Knowlton, who had also had the pleasure of listening to the Hometown Frolic as a youngster. This article also quoted Don’s recollection of my letter sent to him from Kuwait in 1997:
In August of 1977 the Arizona Republic did a feature on Don which was read by a former resident of New Jersey now teaching school in the Middle East. The reader was so moved by the article that he wrote to Don: ‘I love country and bluegrass music. But as a New Jersey native I am sometimes asked how I developed the love of this kind of music growing up as I did 30 miles from New York City. My stock reply is alway like: Well, when I was very young we didn’t have television and I listened to the radio a lot. There was this station WAAT from Newark and a disc jockey, Don Larkin, who played country music every day on this show. I grew to love Hank Williams, Hank Snow, Johnny & Jack, Bill Monroe, Patsy Cline, Elton Britt, Montana Slim and so many others because of Don and his program. Listening to ‘Larkin Barkin’ was one of the highlights of my childhood. Thank you and WAAT again for bringing so much wonderful music into my life in those early years”. Thank you Don and Mr. Knowlton for including this in the article.

Recalling the pleasure of listening to Don Larkin’s radio program so long ago and the later fortuitous discovery of where he lived and subsequent meeting with him and his wife Peg, also now well in the past, I have experienced great pride and happiness in writing this article about him and his work and what they meant to me and so many others. I feel very privileged to have also perhaps touched his life in some small way and to have been singled out by his lovely wife for the gift of precious mementos of his life and career. I am but one of the thousands of listeners he had back then but I earnestly hope that at least a few of the rest discover this paean to Don Larkin and the Hometown Frolic and enjoy reading it as much as I have enjoyed writing it.

5 thoughts on “When I Fell in Love with Country Music”